In the summer of 2010 I completed my goal of reaching the high point of each of the lower 48 states and I set a new goal – to read all of James A. Michener’s writings. Many of his books are very long and the print is very small.  I completed The Covenant (1235 pages) this summer, but not without a lot of breaks reading something else to rest my eyes.  Here are some of the other books I’ve been reading: 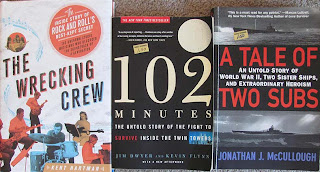 The Wrecking Crew – Kent Hartman
The story of the musicians who recorded much of the Roll & Roll music of the 60s and early 70s. In some cases they replaced members of groups such as the Beach Boys and Simon & Garfunkel during recording sessions. Some members of the wrecking crew, such as Glen Campbell went on to become famous on their own.
102 Minutes – Jim Dwyer & Kevin Flynn
The 9/11 story from the perspective of survivors and rescuers. It was 102 minutes from the time the North Tower was hit until it collapsed; the South Tower was hit later but collapsed sooner than the North.  I was surprised to learn that building codes had been weakened over the years so that the Trade Center towers had fewer stairways than the Empire State Building, and they were enclosed in drywall rather than concrete.
A Tale of Two Subs – Jonathan J. McCullough
The USS Sculpin and the USS Sailfish (originally named the USS Squalus) were sister subs; built side by side. The Sculpin had helped rescue Sailfish crew members after a test dive accident and in 1943 both were involved in the war against Japan. The Sculpin was damaged by a Japanese Destroyer and forced to surface. Survivors were taken prisoner and divided between two Japanese aircraft carriers; Chuyo, and Unyo. The Sailfish attacked and sank the Chuyo, unaware that American prisoners were aboard.
The book also talks about the intelligence gained by breaking the Japanese code, and about the problems with American impact and proximity torpedo fuses. 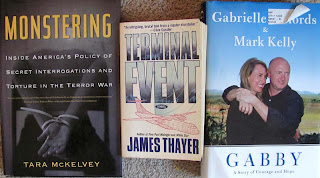 Monstering – Tara McKelvey
Subtitled “Inside America’s policy of secret interrogations and torture in the terror war”, this book in centered on the problems at Abu Ghraib. It seems that “enhanced interrogation” was justified as a way to get lifesaving intelligence from high value captives, but was used on prisoners randomly. Official approval at the top, lack of direction and control in the middle, and depravity among some at the bottom resulted in prisoner’s injury and death.  Many Iraqis who might have looked favorably on the US became enemies as a result of mistreatment by the US military, the CIA, and contract interpreters and interrogators.
McKelvey says, “The vast majority of prisoners at Abu Ghraib had no information about the insurgency or about possible future acts of terrorism. Yet American interrogators, guards, and contractors applied harsh techniques and then used some of their own methods that did not appear on the approved list.”
Terminal Event – James Thayer
This is a novel about a National Transportation Safety Board (NTSB) and FBI investigation into the crash of an airliner. It is well written and kept me guessing. It was loaded with authentic sounding tidbits about investigative techniques and aircraft systems. For example, after a crash the most common words found at the end of the recording from a cockpit voice recorder are, “Oh shit!”
Gabby – Gabrielle Giffords & Mark Kelly
This is a biography of Gabby and Mark going back to their childhood, but concentrating on the period after she was shot, through her appearance in Congress to vote for the debt ceiling bill. It covers the behind-the-scenes events that mesh with what we were hearing on the news. There is a very interesting chapter on Mark’s final space flight, STS-134. The emcee at their wedding reception, Robert Reich, toasted to “a bride that moves at a velocity that exceeds that of anyone else in Washington, and to a groom who moves at a velocity that exceeds seventeen thousand miles per hour.”

I’m continuing to read Michener, and I’ll talk about his books at another time.
Posted by Allen at 8:40 AM No comments:

Dinah and Oliver Witte have been friends for decades. Oliver is a journalist (He wrote about our solar panels at http://lifeisgood2.com/TravelReports/2011_1/SolarMagazineArticleFeb2011.pdf), a journalism professor, and is in the process of writing a dissertation for his doctorate. We visited him at a restaurant and at his home in Carbondale, IL
The next stop was in Chicago to visit Dinah’s sister Pat and brother-in-law Dick. Our original plan had been to attend their 50th anniversary party at the end of June but Dinah’s leg problems delayed us. We missed the party, but had them all to ourselves for a full day.
On to Grafton, WI to visit Linda & Warner Schafer. Linda has been in and out of the hospital for two years now and continues to have serious health problems. On this visit we found her to be somewhat better.
We visited with Dinah’s brother Bob, his wife Ellen, their son Steve, and his wife Ann.  Dinah pumped them all for information and opinions on the iPhone and iPad, and even had them take her to the local Apple store … twice!
Next, we visited with Allen’s navy buddy Mike Sherman and his wife Martha.  They have been on the road as full-time RVers for about a year and are spending the summer near family.  We met them in Montello, WI where we strolled around downtown, had lunch, and chatted. I walked around their RV park with them and their new dog, Maddie Wigglebottom.
Dinah visited the Mayo Clinic in Rochester, MN as a drop in patient hoping they would be able to help her with her spine problems.  We had hoped they would accept her and had allowed time to stay there for a while if necessary.  But they required a referral from one of her doctors which she did not have, so she decided to try again at another time.
We moved on to a Corp of Engineers park on the Mississippi River.
Posted by Allen at 3:00 PM No comments: