A flight in a 1941 open cockpit biplane

On Sunday Dinah & I drove to the Santa Teresa, NM airport where we had arranged for flights in a 1941 Boeing Stearman open cockpit biplane at Far West Aviation.

Since the plane only seats two, and it is advisable that one of them know how to fly the plane, Dinah and I went up separately with Steve, the pilot and owner of the plane, in control from the rear seat. 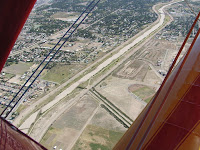 We flew east from the airport across the Rio Grande into Texas, then north along the Franklin Mountains, then back west where we were given a chance to fly the plane, and to experience some mild acrobatic maneuvers.  The weather was great and the view from the open cockpit was superb!

A ride on Amtrak from Boston to El Paso

I flew east, but decided to return home by train, just for the experience.  I arrived in Boston with a backpack full of food to last the three plus days it would take to get to El Paso. We got off to a bad start when the train left Boston late, and stayed behind schedule all the way to Chicago.
I had a couple of hours to kill in Union Station where I saw my first motorized toilet seat. The seat is encased in a continuous plastic sleeve which is advanced to a new, clean section after each use.  Cool!

I was to transfer to the Texas Eagle which would take me to San Antonio, Texas where we would join with another train heading to Los Angeles.  The Texas Eagle was late leaving Chicago, but we had a scheduled 8 hour layover in San Antonio, TX, and we left there on time.
From Boston to San Antonio, most of the views were of trees along the tracks, but from here on we were in desert with expansive views, sometimes allowing us to see into Mexico.

We crossed the Pecos River on what we were told was once the highest railroad bridge in the US, and 3rd highest in the world.
During my time on the train I got little sleep, and developed some saddle sores from spending about 22 hours per day, for more than three days, sitting in a seat. I did do a lot of reading! We arrived in El Paso a little ahead of schedule, and I hustled to the bus terminal to catch the bus to Las Cruces.  Great trip, but good to be home.
Posted by Allen at 1:20 PM No comments:

I flew east in late September to attend my 50th High School reunion, and also to visit with family and friends.  Here are some pictures from those visits. 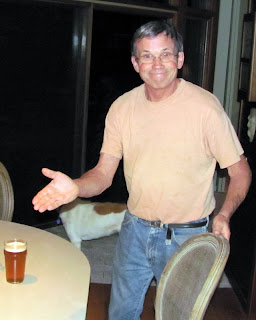 Dave & I also visited with Cousin Barb and her husband Fred Blankinship (sorry, no pictures), and of course, no New England visit is complete without a stop at Kimball Farms for a Kimball Special - three large scoops of ice cream, strawberry, pineapple, and chocolate sauce, whipped cream, and nuts!