Dinah came home last night.  She had been given a series of tests including a bone scan and an MRI, and the conclusion was a probable bone infarct.  According to Wikipedia, that is "tissue death caused by an obstruction of the tissue's blood supply, which leads to a local lack of oxygen. The resulting lesion is referred to as an infarct", so a small section of her femur, near the base of the implant, and near the bottom of the fracture from a few weeks ago, may have died.  The treatment is to stay off the leg, and observe it over time.  Ominously, Dr. Bean said, "I don't think we need to replace this hip just yet".
We are hoping that Dinah will heal herself and that no further surgery will be needed.
Posted by Allen at 8:30 AM No comments:

Hurry up and Wait

Dinah arrived at Sierra Medical Center Monday night, but apparently was not admitted until Tuesday morning. On Tuesday she was given an MRI, a nuclear imaging test (Bone scan), and an ultrasound test of her leg.  The infection Dr told her that it does not appear her leg is infected, and another operation is probably not advisable.
Today not much has happened so far. Dr Bean has not been by yet today and it is not clear when he will next visit her. So at this point, the problem of pain in her leg remains unresolved, and she is in limbo waiting to hear from Dr. Bean.
Posted by Allen at 11:46 AM No comments:

Back to the Hospital

Dinah's left leg began to give her trouble last week, and she regressed from cane to walker a couple days ago. This morning she headed out for a couple of Dr. appointments, driving herself.  But she soon reached the point where the leg hurt enough that she was simply not able to walk. She called Dr Bean, the hip surgeon, and they decided she should go to the hospital.  I drove her to El Paso Specialty hospital where x-rays were taken.
Dr. Bean was concerned that the left femur might have an hairline fracture near the bottom of the hip replacement's shaft. He wanted more imaging that was not readily available at the Specialty hospital, so she was sent to the hospital where her last operation was performed.  That hospital is all of 1/4 mile from Specialty, but I was not permitted to drive her; instead, she waited 2 hours for an ambulance, and I went home to feed the pets. As I write this, she is settled into her new room. Imaging might happen tonight, but more likely tomorrow morning.
We had been working to be ready for our planned departure in our motor home for our summer travels on Wednesday. That has now been delayed until Saturday or later.
Posted by Allen at 8:15 PM No comments:

The enormous wildfire in New Mexico, mentioned regularly on network news programs, is burning near the Continental Divide in the Gila National Forest in Catron County, which is within the service area of our Red Cross - The American Red Cross in Southwestern New Mexico.
Dinah & I have not been involved with the fire, but it has made the news frequently enough that I felt it deserved a mention here. It is the largest wild fire in New Mexico history. As of 8AM this morning (Saturday 9 June) it has burned almost 275,000 acres which is over 425 square miles, and is about 1/3 contained. Currently, the fire is being fought by 826 fire personnel with 30 engines, 27 water trucks, 4 dozers, and 10 helicopters.  For the last several days temperatures have been in the 90s and humidity in the single digits.  Today there is a "Reg Flag" high wind warning. The fire is 100 miles or more northwest of Las Cruces, but we have had at least one day with lowered visibility and a smell of smoke. You can see more about this fire at http://inciweb.org/incident/article/2870/14152
As of last Monday, there is another fire on the eastern boundary of our Red Cross area; the Little Bear Fire, near Ruidoso, NM, which is expected to require evacuations, and the opening of a Red Cross shelter.
Dinah's hip replacement has kept her out of active Red Cross service, and I have been attempting to limit my role to facilities maintenance, and computerized record keeping. Dinah & I still respond to single family fires but I'm trying to phase myself out of that as well.
Posted by Allen at 3:28 PM 1 comment:

Harriet Russell at the Las Cruces Museum of Art

Dinah is a sometimes vendor at the Saturday Downtown Las Cruces Farmer's Market which is located on Main Street, and Dinah's booth is located in front of the Las Cruces Museum of Art.  As we were setting up this morning, Dinah noticed the billboard for the current show and it displayed the name "Harriet Russell".
Now, Harriet "Saucy" Russell is my former wife; we were married from 1975 until 1992. She was on the faculty of the School of the Museum of Fine Arts, Boston, when I met her and has been an artist all her life.  She now lives in Cuba, New Mexico, where she has a studio and continues to do art. 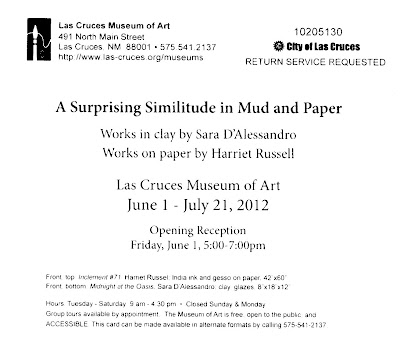 I'm not an "Arts" person, most of Sauce's work is abstract, and I've never really appreciated what she does. But one picture I have always liked very much is Sauce's 'The Birches' done in 1980 from a picture of birch trees on land that she & I owned in New Hampshire.  That picture now hangs in Dinah's & my dining room.
So if you happen to be in Las Cruces between now and 21 July, stop in and check out her work.  If not, you can check it out at http://www.harrietyalerussell.com/
Posted by Allen at 4:30 PM No comments: