While walking the dogs one block from home, we came across a giant tortoise walking out one driveway and into the next.  I assumed he/she was a pet from a nearby house.  But when, a few days later, I saw him crossing the street in front of our house I decided he must be wild or lost. I tried to pick him up and carry him to our yard, but he was too heavy for me to lift. So I herded him through the gate into our yard and Dinah called animal control. 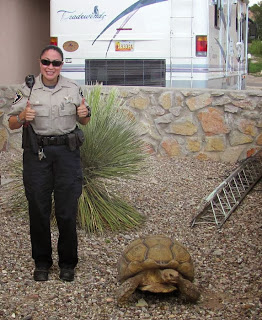 It took both animal control officers to lift him into their truck and he was taken to the animal shelter where he weighed in at 130+ pounds. We understand he was claimed by someone living on our street and we haven't seen him since.
The video below lasts about 43 seconds, and shows the tortoise walking around our back yard.